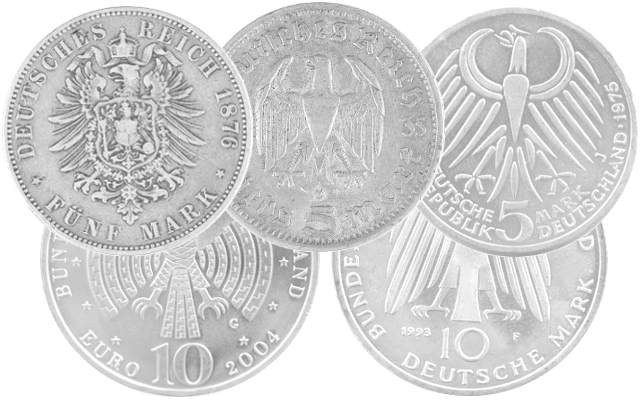 The commemorative coins in EUR issued by the Deutsche Bundesbank often also have a high silver content, e. g. the 10 EUR commemorative coins of the years 2002 - 2010 have a silver content of 16.65 grams. If the breakdown of the euro currency system arises, you simply have the silver in these euro coins as a coverage - contrarly to "normal" euro coins. If the silver price falls extremly, you have in any case the nominal value of the coin, thus 10 EUR or 20 EUR or 25 EUR.

A further advantage of the coins, that once were official means of payment (e. g. D-mark, reichsmark, mark) or that still are official means of payment nowadays (euro) is the fact that many people (still) know them and that many people still have one or another piece at home. This is not the case to this extent for standard coins from the silver range, such as the Vienna Philharmonic, the Maple Leaf or the Silver Eagle. If the euro collapses, many people will be insecure and will panic. If you then appear with "old" silver money as means of exchange, this silver money is rather likely to be accepted in the first place than the relatively unknown silver ounces. You rather trust something that you know. And you do not directly attract attention if you now pay with "old" silver-containing money or with well-known standard commemorative coins instead of brilliant new silver coins.

Additionally, this silver money also has a silver content considerably below 1 ounce (1 oz = 31,103g). If the silver price increases sharply, you then automatically have "small coins". For the smaller units of the standard coins below 1 ounce you often pay considerably more per gram of silver.

For those who also want to be prepared for this scenario, we recommend a certain amount of "old" money and silver-containing commemorative coins, even best in a "used look", thus with traces of usage and specifically not high-gloss as if they came straight out of a collector's album.

Please click here for the complete offer of the silver coins from Austria, Switzerland and France. For the "old" silver coins or silver money from the US, Italy and other countries click here.

If you have special wishes concerning the silver coins from Germany, the Third Reich, the Weimar Republic or the German Empire, please give us a call!
Price list: (11 products)
Status: 27.06.2022, 13:48
Price update in 4 minOutdated prices: reload now
only articles
in stock
Print