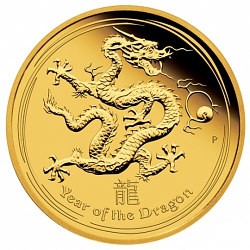 Naturally, one can always comfortably give a 'normal' gold coin. If one provides it additionally with an appealing packaging (see suspending frames + cases), the presentee will surely be glad about the recoverable present.

In this category, you will find all offers of the gold range summarized whose collector's aspect or aesthetical added value significantly increases the price compared to standard coins with the same precious metal content.


Those ones look like coins. However, coins are functional currency in at least one country of the world and therefore bear a minting with an indication of this country or this currency. Medals lack this characteristic.

Medals are often minted for commemoration or as a hint to several occurrences, what makes them especially advisable for giving. Their value is composed of the precious metal content and the sentimental bonus, that enthusiasts are ready to pay. However, in contrast to sheer enthusiast's items, they always have a 'real' inner value due to the precious metal content, which does not get lost even when the enthusiast's aspect fades away. 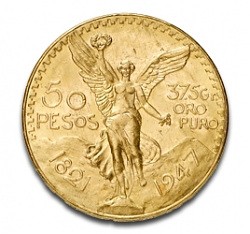 
There are often given out special mintings of standard coins, which are produced in a limited volume of issuance and/or a higher quality of minting. 'Proof' or 'Polierte Platte' in German thereby is the costliest quality of minting.

Even for standard coins, several series or motives turn out to be a collector's coin afterwards, because buyers are willing to pay a price that far exceeds the precious metal content.

One example for this are the elder age groups of standard coins, such as the Chinese Panda or the US-American Buffalo. 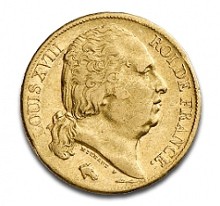 Even for specifically published series of certain motives on coins, the increase in value of the elder age groups is partly very high due to the collector's aspect. Examples are the 'Wild Life' series from Canada and the 'Lunar I' and 'Lunar II' series from Australia: Dragon, Snake etc.

Clever investors therefore add those gold coins to their gold portfolio, which are currently still available at a low price and which have good chances in the future to turn out to be enthusiast's items. Hot candidates thereby are the current age groups of the China Panda, the American Buffalo, the Australian Lunar II series: e.g. the 'Goat' or the 'Horse' - and the Canadian 'Howling Wolf'.
. 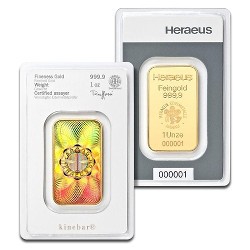 
There are also special sorts of bars, which have an increased value in relation to the normal standard bars.

In the case of the so-called kinebars, there is a three-dimensional hologram recognisable on the back, which is applied through a costly procedure.

In the case of the so-called motive bar, there are several motives - for example a chimney sweep or shamrock - imprinted on the blister packaging, which should symbolize luck and health. Those bars are very popular as presents.
.


We are also pleased to have an individual engraving applied on your standard bar by a goldsmith who we cooperate with.

Short texts, such as 'For the Communion from your aunt Erika' or 'For the 25. company anniversary at Mo AG' thereby are very common.

The size of the bar limitates the available space for the engraving.

Simply ask what an indiviual engraving on your bar costs!