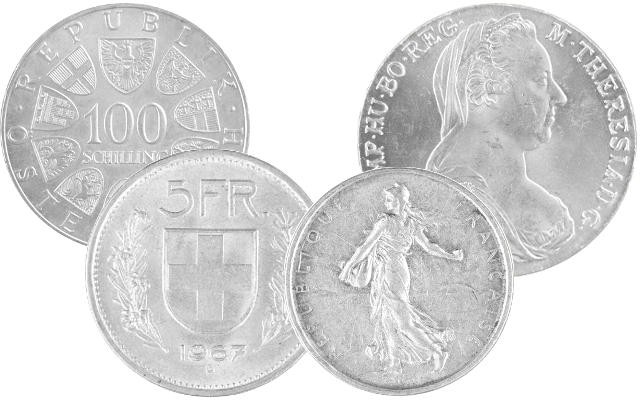 Here you may find silver-containing coins from Austria, Switzerland and France, that were used as circulation coins in these countries or that were issued as commemorative coins by the State.

Many of the silver-containing shilling coins can still be exchanged for euro coins at the official exchange rate at the National Bank of Austria: nominal value of 25, 50, 100 or 500 shilling. Please find the complete list of coins that can be exchanged here (link).

The commemorative coins in EUR issued by the National Bank of Austria and the Bank of France often also have a certain silver content. They are especially interesting for people living in Austria or France and for people who visit those countries from time to time. For instance, the 10 EUR commemorative coins issued by the Münze Österreich from 2002 on have a silver content of 16 grams. If a collapse of the euro currency system actually occurs, you simply have the silver in these euro coins as a coverage - contrarly to "normal" euro coins. If the silver price drops sharply, you still have the nominal value of the coin  left, thus 5 EUR, 10 EUR or 20 EUR or 25 EUR.

Another advantage of the coins that were once official currency (e. g. shilling or franc) or that still are official currency (Swiss franc and EUR commemorative coins) is the fact that, especially in times of crisis, they are (still) known by many people, either from the past or because they or their grandfathers still have some of them at home. By contrast, only approx. 10% of the population is familiarised with silver standard coins, such as the Maple Leaf, the Vienna Philharmonic or the Silver Eagle.

For this reason, this "old" money or the commemorative coins may be easier to use as means of exchange in case of a euro collapse than the relatively unknown standard silver coins - at least in the initial phase when everybody is still insecure and nobody knows how things will go on.

Many of these silver-containing coins, that once were or still are official currency also have a silver content that lays considerably below 1 ounce (31,103g). Here, you automatically have "small coins" which is escpecially important if the silver price increases sharply due to an euro collapse. The smaller units of the standard coins below 1 ounce are usually considerably more expensive per gramm of silver content.

By the way, especially the older, widely known and visually imperfect silver coins are qualified best for being a means of exchange. They simply do not look like a precious collector's item, since they are tarnished or a little scratched and are still found in many households. This does not raise any undesired covetousness in other people that watch you and do not have anything for themselves. Maybe those people might rather assume at the sight of a shiny, visually perfect, and furthermore unknown silver coin that there might be more where this one came from.

Especially to those people who live close to the border or who have relatives in neighbouring foreign countries, we recommend the addition of "old" money or silver-containing euro commemorative coins from these countries. Maybe this might be helpful if you want to exchange something over there that does not exist (anymore) here after the euro crash. In any case, the silver content remains! For France, you could e. g. consider purchasing 5 franc france "sémeuse" (1959 - 1969) with 10.02g of silver, for Austria 50 shilling (1959 - 1973) with 18g of silver and for Switzerland 5 franc (1937 - 1967, 1969) with 12.5g of silver.

Please find the complete offer of silver coins from Austria, Switzerland and France here, for the "old" silver coins or silver money from the US, Italy and other countries, such as 500 lire (1958- 1979) with 9.185g of silver please click here.

For former silver-containing money and euro commemorative coins from Germany, the Third Reich, the Weimar Republic and the German Empire please click here.

If you have special wishes concerning the silver coins from Austria, Switzerland or France, please do not hesitate to give us a call or to write us an e-mail!
Price list: (17 products)
Status: 27.01.2022, 23:59
Price update in 2 minOutdated prices: reload now
only articles
in stock
Print