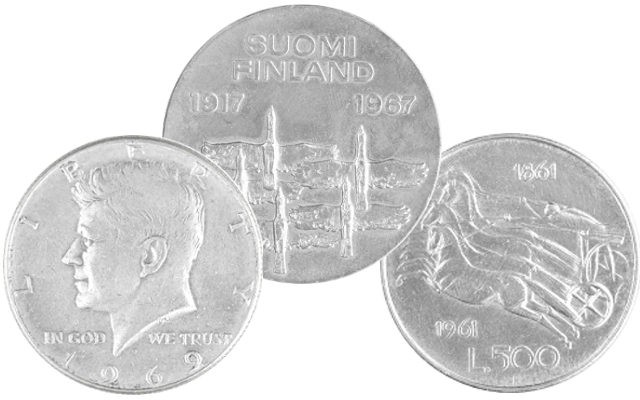 Here you may find silver-containing coins from the US, from Italy and from other countries, as far as we have them available for you. They were or are used as circulation coins over there or were issued as commemorative coins by the States.

We recommend the addition of smaller quantities of these (former) means of payment of the respective countries to all those who often visit those countries on private or business related trips.

In times of crisis, when the actually valid currency collapses, it can be of advantage to have well-known silver money available to be able to exchange the the bare essentials without arousing suspicion that there might be more valuable things to steal at your home. The "payment" with older silver coins, ideally in a visually imperfect state and in a form that many people of the respective region know, is less conspicuous than the payment with high-gloss standard silver coins, such as the Maple Leaf, the Vienna Philharmonic or the Silver Eagle!

The same applies for certain commemorative coins that were issued in bulk in the respective country and that can be found in many households there. If those commemorative coins - e. g. euro coins in Spain - additionally are actual means of payment, you have a well-known means of payment in the case of a crash, but one out of silver which determines the exchange value then. If the crash stays away, you always have a good downside protection if the silver price drops, since you can always change it for the "normal" coins of the currency.

Many of those silver-containing coins, that once were or still are official currency, also have a silver content that lays considerably below 1 ounce (1oz = 31,103g). Here, you automatically have "small coins" which is especially important if the silver price increases sharply due to a currency collapse. For the smaller units of the standard coins below 1 ounce you usually pay more per gram of silver content.

For other countries, you may find a corresponding offer here: silver coins from Austria, Switzerland and France, and here for Germany, the Third Reich, the Weimar Republic and the German Empire.